Washington, DC – America’s currency would regain stable footing for the first time in half a century if a bill just introduced by U.S. Representative Alex Mooney (R-WV) becomes law.

Referred to as the “Gold Standard Restoration Act” by sound money activists, H.R. 9157 calls for the repegging of the Federal Reserve note to gold in order to address the ongoing problems of inflation, runaway federal debt, and monetary system instability. 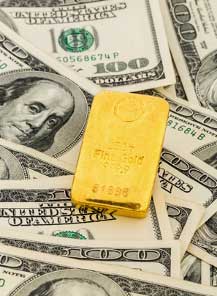 Upon passage of H.R. 9157, the U.S. Treasury and the Federal Reserve would have 30 months to publicly disclose all gold holdings and gold transactions, after which time the Federal Reserve note “dollar” would be pegged to a fixed weight of gold at its then-market price.

Federal Reserve notes would become fully redeemable for and exchangeable with gold at the new fixed price, with the U.S. Treasury and its gold reserves backstopping Federal Reserve Banks as guarantor.

“The gold standard would protect against Washington’s irresponsible spending habits and the creation of money out of thin air," said Rep. Mooney in a statement.

"Prices would be shaped by economics rather than the instincts of bureaucrats. No longer would our economy be at the mercy of the Federal Reserve and reckless Washington spenders.”

Economists have observed that the elimination of gold redeemability from the monetary system freed central bankers and federal government officials from accountability when they irresponsibly expand the money supply, fund government deficits though trillion-dollar bond purchases, or otherwise manipulate the economy.

“At times, including 2021 and 2022, Federal Reserve actions helped create inflation rates of 8 percent or higher, increasing the cost of living for many Americans to untenable levels…enrich[ing] the owners of financial assets while… endanger[ing] the jobs, wages, and savings of blue-collar workers,” H.R. 9157 states.

“To enable the market and market participants to arrive at the fixed Federal Reserve Note dollar-gold parity in an orderly fashion... the Treasury Secretary and the Board of Governors of the Federal Reserve shall each make publicly available… all holdings of gold, with a report of any purchases, sales, leases, and any other financial transactions involving gold, since the temporary suspension in August 15th, 1971, of gold redeemability obligations under the Bretton Woods Agreement of 1944.”

Furthermore, H.R. 9157 requires the Fed and the Treasury to disclose “all records pertaining to redemptions and transfers of United States gold in the 10 years preceding the temporary suspension in August 15, 1971, of gold redeemability obligations.”

“A return to gold redeemability would arrest the problem of inflation, restrain the growth of wasteful and inefficient government, and kick off an exciting new era of American prosperity,” Gleason concluded.

The full text of Rep. Mooney’s gold standard bill can be found here. It was introduced on October 7, 2022, and referred to the House Committee on Financial Services.

The Sound Money Defense League is a non-partisan public policy group working nationally to restore sound money at the state and federal level and publisher of the Sound Money Index.