In response to Russia’s war on Ukraine, the U.S. and G-7 countries have launched a currency war against the Kremlin. Sanctions imposed on the Russian central bank have effectively blacklisted the country from the U.S. dollar-dominated global financial system.

Now the Biden administration is attempting to prevent Russia from using gold as an alternative medium of exchange. 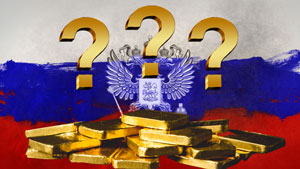 In recent years, Russia has significantly increased its gold reserves.

It currently possesses the fifth largest stockpile in the world, worth an estimated $140 billion.

U.S. officials want to prevent Russia from selling gold in order to fund its war machine. But Russian officials seem more inclined to take gold in lieu of dollars as payment in international trade.

Russia declared that “unfriendly” countries must now pay for Russian gas and other products in rubles or in gold – a move that boosted the value of the beleaguered currency.

Moscow is even considering adopting Bitcoin as an alternative means of payment in international trade, according to reports.

“If they want to buy, let them pay either in hard currency, and this is gold for us, or pay as it is convenient for us, this is the national currency [Russian rubles],” said Pavel Zavalny, chairman of the Russian Duma Committee on Energy.

Zavalny is also urging China to de-dollarize and switch to settlements in gold, rubles, or yuan.

China, India, and the Far East are pivotal players in the global currency wars. If they opt out of the increasingly expansive U.S. sanctions regime, a new bipolar monetary order could emerge.

If the U.S. can suddenly declare that it is freezing the dollar assets of a major foreign central bank and banning their gold from circulation, a lot of other countries will be worried they might be next to get blacklisted. They will naturally want to have a Plan B in place.

It is impossible to predict exactly how the erupting currency wars will reshape the global monetary system.

One possibility is that gold will play a much more prominent role than before.

Ever since the U.S. rescinded gold convertibility in 1971, the fiat “dollar standard” has been in force – backed implicitly by oil and the promise of Saudi Arabia and other OPEC producers to accept dollars as payment.

The petro-dollar is now at risk of losing its hegemony. While the U.S. has historically been able to use its financial and military might to keep Middle Eastern countries in line, it may be overplaying its hand in trying to force the entire world to shun Russia.

As with waging any war, however justified it may be, there will be blowback. The overt weaponization of the financial system against Russia will result in counterattacks directed at the Federal Reserve Note.

A currency’s value cannot be maintained through force alone. Plenty of dictatorships throughout history have gone down the economically ruinous path of hyperinflation.

America’s recent inflation spike may be an ominous sign of what’s to come.

Got gold (and silver)?