Sound Money Is Rising at the State Level

Inflation is the most pernicious of taxes levied by our government. Officials systematically devalue the Federal Reserve Note “dollar,” then levy capital gains taxes on assets when their dollar price rises.

The “gains” are largely illusory. Rising asset prices over time reflect the fact that the dollar buys less of everything. But the tax obligations triggered by this inflation are very real.

Bills calling for the elimination of capital gains taxes on money, i.e. precious metals, have recently been introduced in both Idaho and Arizona.

Money Metals Exchange president Stefan Gleason testified at the hearing and pointed out that “by taxing so-called gains on exchanging precious metals for devalued Federal Reserve Notes, we’re adding another tax on top of the inflation tax.”

Idaho State Representative Ron Nate adroitly observed, “Citizens aren’t allowed to declare capital losses when the dollars they hold lose value. So, it isn’t fair to tax capital gains when the gold and silver they own rises in value.” 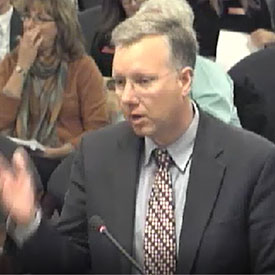 The Idaho bill – HB206 – passed the House Committee on Revenue and Taxation last Thursday and is expected to come up for a vote on the house floor in the coming days.

The Arizona House of Representatives passed its own version of the Idaho bill, HB2014, in mid-February, sending it on to the state Senate which is holding a hearing this Wednesday. Former Congressman Ron Paul is scheduled to testify.

Supporters of sound money are working hard to reestablish gold and silver as money according to state law and to make sure it is treated as such in the tax code. Trading one form of money for another should not trigger any tax. There is no sales tax when customers swap their precious metals for dollars, so switching dollars to bullion should also be tax exempt.

Oklahoma, Utah, Texas, Idaho, and nearly 20 other states already exempt precious metals from sales tax. Utah and Oklahoma have gone one step further, reaffirming the U.S. Constitution’s designation of gold and silver as legal tender. As such the metals are free from all state taxes – including capital gains.

Texas and Tennessee have both approved measures to establish precious metals depositories in their states. Utah legislators are now considering a bill to authorize the same. The idea is to facilitate ownership of gold and silver bullion in state-run investment funds including pensions.

These funds are in desperate need of diversification. Most are stuffed with conventional paper assets which are at risk of going up in smoke in the event of hyperinflation in the U.S. dollar, or another 2008 style financial crisis.

State depositories will also open the door for citizens to more easily use gold and silver in transactions. Parties who have a metals holding in a state depository would be able to make payments to one another by simply and instantly transferring title to the bullion. This would avoid the expense and time delay required in transferring the physical bars.

The movement for honest money is alive and growing. And it is vitally important. The deficits, the mountains of unpayable debt and the metastasizing state and federal governments were all made possible using the black magic of fiat money.

The real prize will be sound money through federal reforms, or state nullification of federal laws and institutions including the Federal Reserve. With the groundwork being laid now, we are perhaps just one crisis away from a return to honest money nationwide.