Why in the World Are Taxes Levied on Money Itself? 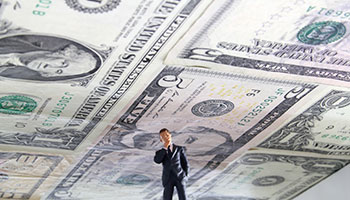 Imagine if you asked a grocery clerk to break a $5 bill, and he charged you a 35 cent tax. Silly, right? After all, you were only exchanging one form of money for another.

But try walking to a local precious metals dealer in more than 25 states and exchanging 20 Federal Reserve notes for an ounce of silver. If you do that kind of money exchange, you will get hammered with a sales tax. That’s the price you can pay for bucking the system and picking up a piece of the only true money mentioned in the U.S. Constitution.

Of course, sales taxes haven’t been around forever.

Revenue hungry government officials in the 1930s brought us the first broad based, general sales taxes. Kentucky and Mississippi were the first adopters, and it spread rapidly from there.

Today, sales taxes are part and parcel of any shopping experience, in 45 states in the Union. Whether you buy a shirt or a hamburger, tax collectors want a piece of the action and force merchants to collect anywhere from 2.5% to 7.5% on top of your transaction total and forward it to the bureaucrats and politicians in your state capital.

Putting aside whether taxes on consumer goods is right or wrong, charging sales taxes on money itself is beyond the pale. In effect, those states that collect taxes on your purchases of precious metals are inherently saying gold and silver are not money at all.

It’s not difficult to see how these laws negatively affect those who choose to protect themselves from inflation and financial turmoil by saving some of their money in precious metals. Investors won’t want to pay, for example, $100 in taxes on purchase of a $1,350 one-ounce gold coin. It’s a competitive marketplace, so buyers will often purchase online or even travel out of state to obtain their precious metals.

Diversifying into precious metals tax free from an out-of-state national dealer such as Idaho-based Money Metals Exchange is a good option, because states are restricted in attempts to regulate interstate commerce. But state sales taxes reduce investors’ options and thereby have the negative effect of causing local dealers to lose business, threatening jobs and, even reducing those states’ overall tax revenues.

Your Nominal “Gains” from Owning Precious Metals Are Taxed as Income

But the tax problem doesn’t stop at sales taxes. Income taxes are another way in which government bureaucrats penalize holders of precious metals. If you own gold to protect against devaluation of America’s paper currency, you may end up with a “gain” when priced in dollars. Not necessarily a real gain, mind you. It’s a nominal gain on which the government will assess a tax.

At the federal level, your nominal gains on precious metals are taxed at the discriminatorily high 28% long-term capital gains tax rate. (Capital gains on other assets are taxed at 15% or 20%, depending on your income level). And the “gain” you receive from owning our constitutional money increases your taxable income at the state level too. Shame on you for diversifying away from those paper Federal Reserve Notes!

Utah is the leader in rolling back unfair taxation on precious metals. Not only did the Beehive State repeal sales taxes, but it also exempted gains on certain precious metals from the income tax.

Indiana lawmakers have also taken steps to roll back taxation on money. Effective July 1 of this year, House Bill 1046 became law, and Indiana will no longer collect a sales tax on purchases of precious metals by its residents.

State Senator Brandt Hershman (R-IN) argued that the removal of the sales tax also encourages people to save for their retirement by investing precious metals into Individual Retirement Accounts, or IRAs. He highlighted one of the many reasons for the bill, saying, “If you buy a stock or bond or put money into a savings account, you don’t pay sales tax on those items. But you were paying sales tax on these.”

Following in Indiana’s footsteps, Tennessee is eying similar changes. Two bills, HR1627 and SB1610, are working their way through the Tennessee legislature. These bills aim to “exempt the sale of gold, silver, and platinum coins and bullion that are used as mediums of exchange from sales tax.”

Louisiana Reverts Back to Pillaging Its People

Every day we are seeing the American people open their minds to the historic role that sound money has played. We’ve seen a few presidential candidates talk about it. A few state legislatures, too, have recognized the danger of being totally reliant on a monetary system based on debt and unbacked fiat money, and they’re taking concrete steps to liberalize the laws surrounding gold and silver ownership.

While there is a tremendous amount of work to do, we should be encouraged that the stranglehold central planners have over our money is beginning to loosen. People are taking notice that something about the debt-laden economy and their money isn’t right. And people are realizing that money backed by nothing isn’t actually money at all.