Arizona Should End Unjust Taxation on the Monetary Metals 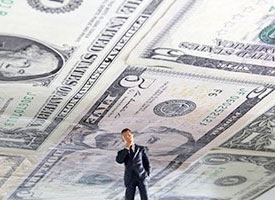 Imagine if you asked a grocery clerk to break a $20 bill, and he charged you $1.40 in tax. Silly, right? After all, you were only exchanging one form of money for another.

But try walking to a local precious metals dealer in more than 25 states and exchanging a $20 bill for an ounce of silver. If you do that kind of money exchange, you will get hammered with a sales tax.

That’s the price you can pay for bucking the system and picking up a piece of the only kind of money mentioned in the U.S. Constitution.

Fortunately, Arizona is one of the states whose laws acknowledge that charging sales taxes on money itself is beyond the pale. But, at least for now, Arizona tax authorities still unjustly impose income taxes on gold and silver.

Income taxes are another way in which government bureaucrats penalize holders of precious metals.

If you own gold to protect against devaluation of America’s paper currency, thanks to the inflationary practices of the Federal Reserve, you may end up with a “gain” on when you sell those metals in return for dollars. Not necessarily a real gain, mind you. It’s a nominal gain on which the government will nevertheless assess a tax.

The Federal Reserve strives for and openly admits it wants an inflation rate of 2% or higher. In other words, it wants the Federal Reserve Note – aka “the dollar” – to lose value year after year. This inflationary policy tends to push up the dollar price of precious metals over time, causing nominal, but not necessarily real, gains for those holding the metals. Eliminating income taxes assessed against these “gains” is a step Arizona should take to promote the adoption and widespread use of constitutional money.

At the federal level, nominal gains on the sale of precious metals are already taxed at the discriminatorily high 28% long-term capital gains tax rate. (Capital gains on other assets are taxed at 15% or 20%, depending on income level). And the “gain” that gold and silver owners experience as a result of dollar devaluation also increases their taxable income at the state level too, because the income number is used as a starting point for one’s Arizona tax return.

Thankfully, Rep. Mark Finchem (R-Tucson) has introduced HB 2014, a measure that would remove precious metals “gains” and “losses” from a taxpayer’s adjusted gross income (AGI). Arizona’s House passed this bill in 2016, but it was not voted upon in the Arizona Senate. Prospects for its passage in 2017 are high.

“The U.S. Mint is charged with protecting the value of money, but the Federal Reserve creates nothing but debt. Yet Congress authorized a tax when making the exchange of precious metals for dollars. It's illegal and they know it, this bill is an effort by one state to protect the people from such confiscation,” said Representative Finchem about his legislation.

Every day we are seeing the American people open their minds to the role that sound money plays in wealth protection and as a hedge against inflation and financial turmoil. We’ve even seen presidential candidates talk about it during the last election and there is growing support in Congress to rein in America’s inflation-creating central bank.

A few state legislatures, too, have recognized the danger of being totally reliant on a monetary system based on debt and unbacked fiat money, and they’re taking concrete steps to liberalize the laws surrounding gold and silver ownership.

While there is a tremendous amount of work to do, we should be encouraged that the stranglehold central planners have over our money is beginning to loosen. People are taking notice that something about the debt-laden economy and their money isn’t right. And people are realizing that money backed by nothing isn’t actually money at all.

Arizona could play a leadership role in this growing movement if it ends all taxation on the monetary metals by enacting Rep. Finchem’s HB 2014.