Growing Suspicions about the Fed and the Status of America's Gold 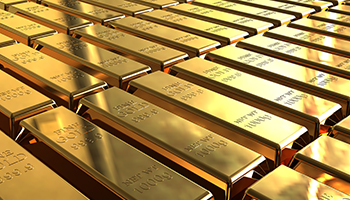 Talk radio personality and commentator Michael Rivero of WhatReallyHappened.com appeared on the Money Metals podcast this week, and has some alarming things to say about the status of America's gold reserves, the Fed's machinations, and related risks to our national security.

You can listen to the full interview here, but here are a few excerpts of particular interest to supporters of Sound Money...

Mike Gleason: Texas recently followed suit of some countries when it announced it would repatriate the state-owned gold and rescue it from the hands of Wall Street and will soon be storing it inside the Texas borders. What do these recent announcements by Texas now and Germany and the Netherlands and a few others before them say about the trust factor among and between these sovereign entities? 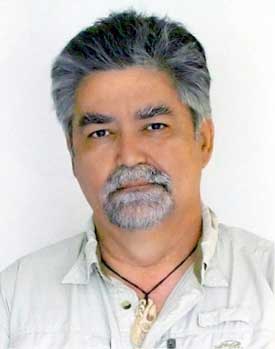 Michael Rivero: Well, trust is really a big issue. Now, the way the New York Federal Reserve and for that the bank of England and the Bank of France, and JP Morgan has a private bullion depository, they function like a safety deposit box. Countries will rent space in the gold bullion vault to store their gold.

The banks are not allowed to go in and use it. It's just like your safety deposit box at the bank. If you rent a safety deposit box, and you put in some gold coins, and you are aunt's heirloom bracelet, you can at any time go on in and remove all of that material.

Well, it seems that the Federal Reserve has been playing fast and loose with other people's gold.They've been leasing it out the back door to drop on the market to keep physical gold and silver prices down so that people don't abandon their savings accounts and their stock market portfolio to buy physical metal.

We know that the amount of gold and silver being traded these days greatly exceeds the output of the world's mines, so it's got to be coming from somewhere. This triggered some concern because over in Germany, they were getting some gold bars that had the hallmarks of Fort Knox and the New York Federal Reserve, and discovered they had tungsten cores, so there's some fakes. 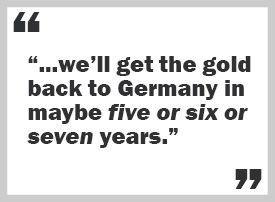 Germany basically said, "look, we put our gold in the New York Federal Reserve after World War II because we didn't want the Russians coming in and taking it, but that's all over, and we're all friends. Send it back." They got the big stall. Germany said, "Okay, can we at least come in and do an audit and look at it?" The New York Federal Reserve said, "no, we're not really set up to do that. Just trust us. The gold is still here, and we'll get the gold back to Germany in maybe five or six or seven years."

This triggered a crisis of confidence all around the world because what little gold has already been returned to Germany are not the original stamped and numbered bars Germany sent over. Tests have shown that the gold being sent back to Germany is nowhere near as pure as it's supposed to be. They're playing these really reckless games, and this has triggered something like seven, eight other countries wanting their gold back.

Texas wants their gold back because there's a growing suspicion it simply isn't there at all. We actually covered this last year in an episode of America's Book of Secrets on the History Channel where all of a sudden people are wondering is the gold really there.

Can you imagine going into your bank, to your safety deposit box and the bank manager says, "I'm sorry. I can't let you take anything out of it, but here, I'll let you look into it from across the room," and you see something that kind of looks like some gold coins and maybe something that might have been a bracelet but not necessarily your aunt's heirloom bracelet you put in there.

The bank manager slams the box shut and says, "There. Go home and be happy." That's kind of the situation that all of these foreign nations and foreign banks and even now, Texas, are dealing with, that the gold that they paid the New York Federal Reserve to store wasn't stored but was actually re-hypothecated for various financial manipulations.

The New York Federal Reserve's rationale is, "Well, we leased it out the back door, but since it's only a lease, we're still technically in possession of it." That only works if they're able to get the gold back, and right now, they're not. This is why people are getting very, very nervous about what is going on. We could easily see a repeat of Roosevelt's 1933, I think it was, ban on private ownership of gold bars and gold coins in order to rescue the banks from their crimes one more time. 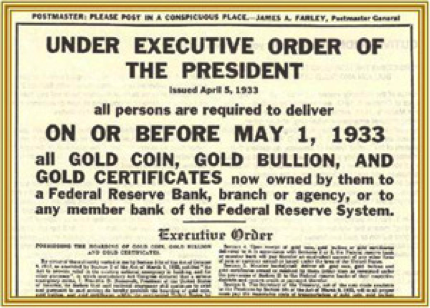 There's no question that the banks are behaving very badly and certainly are very untrustworthy with other people's gold bullion.

Basically, if you've got gold or silver, and you should have it, I wouldn't trust it in any kind of gold depository owned by the banks or the government. There are private gold vaulting companies that are much more trustworthy.

It is amazing how the New York Federal Reserve, which has tried to cultivate this image of trustworthiness and legitimacy for the 100 years it's been in existence and all of a sudden we're finding out that they've actually been playing dirty with other people's property.

Mike Gleason: That leads me right into my next question. The Fed has heavily resisted an audit of its inner workings and the grassroots movement that started the ball rolling with the Audit the Fed initiative, may now be turning its attention toward the gold at Fort Knox, where there hasn't been an audit in over 50 years. I think I know your answer to this, but is the gold there? If not, what do you think's happened to it?

Michael Rivero: Well there is something that looks like gold there.... In response to these growing concerns, the US government or the US Treasury Department refused to do an audit. I think this was in the late 70s after Nixon had ended gold convertibility for the US dollar, which technically brought the Bretton Woods agreement to an end.

They had a big press conference where they went into Fort Knox with cameras and a bunch of politicians and they opened up one vault door and showed a lot of gold bricks, but nobody was allowed to touch them. Nobody was allowed to pick them up. Certainly nobody was allowed to run any kind of an assay on them. Of course, back then it wasn't known that you could detect a tungsten core with an ultrasound probe. It was just basically, "Here, we're showing you the gold. Go away happy." Yeah, at this point, there is reason to doubt that all of the gold that is the property of the American people is still in Fort Knox. 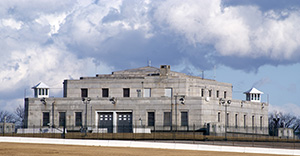 Over time, it's probably been transferred to JP Morgan, the New York Federal Reserve, just dumped on the market because they're desperate to keep physical gold and physical silver prices down. They're certainly over-printing those paper contracts. They're very concerned that people are so distrustful of the stock market and the banks that they're going to start emptying their accounts and just putting their wealth into physical silver and gold, which are wealth preservers. They hold their value. They're universally-recognized as having a value. You can go anywhere on the globe with silver and gold, and you will find somebody who wants you to trade you something for it.

Mike Gleason: Is this potentially an issue of national security or is that over-stating it, the fact that this gold might not be there?

Michael Rivero: It is an issue of national security because were there to be a gold run on the New York Federal Reserve, I mean, nations have gone to war over one nation confiscating or stealing their gold and silver. This could provoke a war. Certainly, it would destroy all trust in the American-centric financial system at a time when so many other nations on earth are trying to move away from a dollar-dominated global economy because as they're seeing with Russia and with Iran, the US government has weaponized the global economic system and uses the world's dependence on the US dollar as a club to coerce compliance.

We're always hearing about all these deals where the US is offering financial aid to a country, but they have to allow GMO seeds in, various other things like that, and looking at what's going on with all this sanctions nonsense, I think the world is awake to the realization that the US government has weaponized the global economy in order to exert its control over other countries.

There's definitely an accelerating trend away from using the US dollar. And the US government's desperate to stop it.

That's why all of a sudden we've gone to talking about war with Russia and China. Literally the war is against the yuan and the ruble, which are rising threats to the global dominance of the US paper dollar, which is not seen as all that trustworthy anymore because it's not backed by anything except a promise of future slave labor of the American people. That's what the treasury bonds are, a promise that somewhere down the road, some American will have money taken away from them, nothing given back for it, in order to make good on the treasury bonds. If that isn't slavery, I don't know what is.