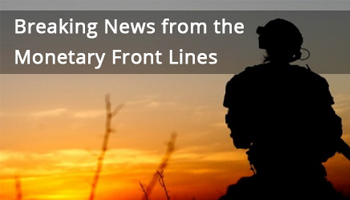 The Texas legislature recently passed a bill allowing for the creation of a state-run gold depository. If approved by Governor Gregg Abbott, the facility would enable the state to "repatriate" its $1 billion in bullion, which is currently in the custody of Hong Kong and Shanghai Bank in New York.

Interestingly, the bill designates the depository as the final destination for "bullion acquired by and transferred to the state and state agencies," implying that Texas would consider its gold holdings to be currency. Perhaps of even greater interest, the facility would allow for holdings of sovereign gold.

Speaking with the Ft. Worth Star-Telegram, bill sponsor Giovanni Capriglione asserted that the creation of the depository "is in line with the idea that Texas is exceptional and needs to keep a distance from the federal government." Unlike the New York Fed, concluded the state representative from Southlake, the Texas government would allow regular audits of the gold in its custody.

Although the creation of the depository could be viewed as a victory in the fight to bring power back to the states, it could also create a significant moral hazard: The taxpayer-funded facility could siphon business from privately-owned depositories by offering low rates that the latter couldn't match. As of this writing, there's scant evidence that the precious metals industry has lobbied the Texas Legislature to amend the bill to include price floors on storage services.

Emerging superpower China recently established the world's largest physical gold fund. The fund, led by the exponentially-growing Shanghai Gold Exchange, is expected to raise more than $16 billion from private and public enterprises, making it larger than some of the most popular paper gold ETFs in the United States.

The creation of the fund is the latest development in China's quest to replace London as the center of the gold universe. The Shanghai Gold Exchange, which has undergone exponential growth in recent years and has become the world's largest physical gold marketplace, has recently signed an agreement with the World Gold Council to create a free trade zone in Shanghai for the purpose of bullion trading.

The flow of gold-backed power from the West to China is impressive, as is evidenced by the following chart of exponential growth of withdrawals at the SGE: 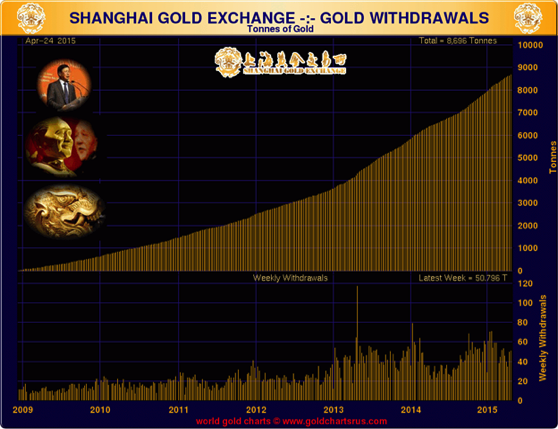 Financial pundit Max Kaiser has called the torrent of gold flowing from the West to China a "major, potentially catastrophic blunder of monetary policy." We couldn't agree more.

Ron Paul's signature bill, which passed the House with bipartisan support but was blocked in the Senate last year by former Majority Leader Harry Reid, has been reintroduced by the elder Paul's son (and presidential contender) Senator Rand Paul.

The Audit the Fed bill, which now has 30 co-sponsors – including 3 competing for the 2016 Republican presidential nomination – now rests in the hands of current Majority Leader Mitch McConnell, who is also a co-sponsor of the bill. Unfortunately, the future of the proposal remains unclear: According to the Wall Street Journal, McConnell has "many competing demands."

A Rasmussen study conducted in 2013 revealed that 74% of Americans wanted the Fed to be audited. Public anger toward our nation's central bank may have waned since that study, as the Fed's asset bubble-induced "recovery" lulls the masses. But, as Seth Mason argued previously, passing the Audit the Fed Bill will become politically expedient in the wake of another economic implosion, which is bound to happen happen, sooner or later.

Joining the cadre of financial institutions that openly criticize the Fed, Deutsche Bank recently stated that the Fed "has been horribly wrong". Here are some highlights from the bank's scathing report:

Truth be told, we think the Fed is obliged to talk up the economy because if they were brutally honest, the economy (sic) what vestiges of optimism remain in the domestic sectors could quickly evaporate.
At issue is whether or not the Fed in particular but the market in general has properly understood the nature of the economic problem. The more we dig into this, the more we are afraid that they do not. So aside from a data revision tsunami, we would suggest that the Fed has the outlook not just horribly wrong, but completely misunderstood.
...the idea that the economy is "ready" for a removal of accommodation and that there is any sense in it from the perspective of rising inflation expectations and a stronger real growth outlook is nonsense.