Will Sound Money Impact the 2016 Election? 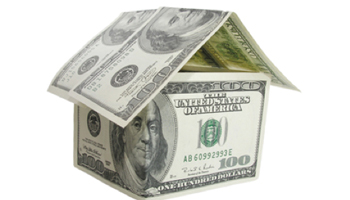 As Hillary Clinton, Jeb Bush, Rand Paul, and other prominent 2016 presidential contenders field test their campaign talking points, how will they address the issue of sound money?

In previous election cycles, candidates could get through an entire campaign without even being asked about the role of the Federal Reserve in shaping monetary policy. It was a non-issue. The Fed enjoyed the unquestioning support of both Republicans and Democrats.

A string of recent Fed chairmen have served terms extending through both Republican and Democrat administrations.

After President Jimmy Carter appointed Paul Volcker to head the Fed, Ronald Reagan re-appointed him in 1983. After Volcker stepped down, President Reagan nominated Alan Greenspan in 1987.

Greenspan served an unprecedented five terms as Fed chair through Presidents Bush, Clinton, and Bush II. Greenspan was succeeded in 2006 by Bush nominee Ben Bernanke, who was re-appointed to a second term in 2010 by President Obama.

In short, both Republicans and Democrats have embraced the same exact monetary policies for decades. It’s not difficult to understand why. The Federal Reserve System enables and backs up the otherwise untenable fiscal policies of both parties.

The Democrats have made grandiose pension and entitlement promises that cannot be kept except through steady currency depreciation (courtesy of the Federal Reserve). If the government’s promises were denominated in gold, or dollars redeemable in gold, the limited supply of gold would serve as a constraint on entitlement growth. Politicians don’t like constraints on their ability to spend, which is why they are hostile to gold and completely supportive of Fed-managed fiat money.

That goes for Republicans, too. The last Bush administration committed the nation to hugely expensive overseas wars. Conveniently, it did so without having to raise any taxes to pay for them. The costs of the Iraq and Afghanistan wars were simply put on the national credit card.

“Deficits don’t matter,” former Vice President Dick Cheney once quipped. That’s because no matter how big the deficits get and no matter high the total national debt soars, the Federal Reserve will always be there to buy government bonds if necessary. It’s called debt monetization. The Fed insists it doesn’t monetize debt, but the facts show that it is now the largest holder of Treasury securities.

The Fed is the great enabler of government debt spending. For all the electioneering bluster about stark differences on hot-button policy issues between Republicans and Democrats, their differences on monetary policy have been nil. Until recently.

Former Congressman Ron Paul for years waged a lonely battle to audit and reform the Fed. Now, with the help of his son Sen. Rand Paul, most Republicans support the Audit the Fed Bill (which was reintroduced in Congress earlier this year). Not surprisingly, Obama’s hand-picked Fed chair Janet Yellen bitterly opposes a Congressionally mandated audit of the Fed’s books.

Rand Paul Is No Ron Paul 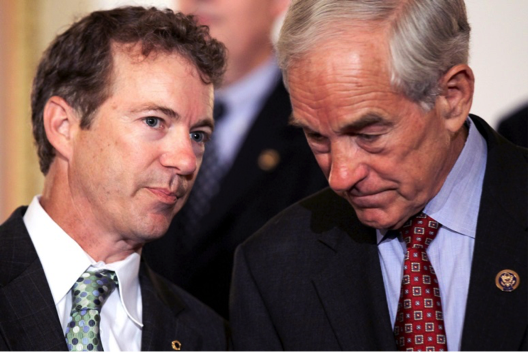 Sen. Rand Paul (left) is not the pure
ideologue his father Ron Paul is.

Rand Paul’s recent entry into the presidential campaign ensures that the monetary issue won’t be ignored by the media or the other candidates. “The launch of Paul's presidential campaign,” reports Bloomberg, “poses the clearest populist threat to the central bank in generations.”

Disappointingly, however, Rand Paul failed to mention the Fed even once in his announcement speech. He’s a very different politician than his father. Many of Ron Paul’s loyal supporters have been disappointed by Rand Paul’s policy drifts while in the Senate.

Rand has repudiated some of his former free-market commitments, has called for increasing the Pentagon’s budget, and is seemingly trying to position himself to the left of Barack Obama on race and civil rights at a time when leftist racial narratives are causing cities to burn.

So naturally, some sound money advocates are wondering just how committed a President Rand Paul would be to reforming the monetary system.

Auditing the Fed is one thing. Actually taking power away from it is another!

Even if Rand Paul’s bid for the Republican nomination is unsuccessful, his presence in the debates will hopefully force all the other Republican contenders to at least take a public position on auditing the Fed – and whether they would re-appoint Janet Yellen. Texas Senator Ted Cruz regularly talks about the need to audit the Fed. Most of the other Republican candidates seem to be reluctant supporters at best of a Fed audit and uneager to propose any significant monetary reforms. 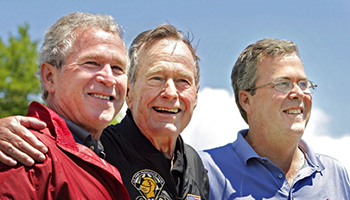 Meanwhile, it’s difficult to conceive of Jeb Bush repudiating both his father and brother for appointing Alan Greenspan and Ben Bernanke, respectively, to the Fed. But understanding the mistakes made by Greenspan and Bernanke in flooding the financial system with excess liquidity is crucial to preventing another asset bubble and post-bubble financial meltdown.

Let's each do our part to make the politicians take a position on sound money.