Who Will Forgive the Government's Debt?

So much for “inflation reduction.”

Just a few days after signing Green New Deal legislation, rebranded as the Inflation Reduction Act, President Joe Biden has moved to completely undo its core promise by pumping hundreds of billions of dollars into another new bailout package.

On Wednesday, Biden announced the government would forgive student loan debt for around 20 million borrowers. 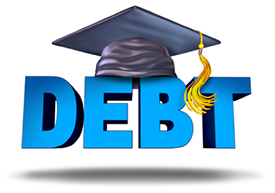 This debt jubilee is expected to cost upwards of $300 billion.

Not even an army of 86,000 new IRS agents is likely to extract that much revenue back from taxpayers – which means, of course, that the free rides given to millions of borrowers will function as yet another deficit-financed stimulus scheme.

The COVID-related stimulus programs and bailouts pushed through in 2020 helped push inflation to a 40-year high in 2022. Now the Federal Reserve is raising interest rates to try to contain inflation.

Even as the Fed is punishing borrowers and trying to restrain the growth of money and credit, the Biden administration is doing the opposite.

Whatever progress the central bank has made in containing inflation could be lost due to the government's unwillingness to contain government borrowing and spending.

A budget model by the University of Pennsylvania's Wharton School of Business projects that student loan forgiveness will add $330 billion to the deficit – exceeding the deficit shrinkage promised to come from increased revenues via the Inflation Reduction Act's IRS enforcement buildup.

Economists warn that student debt cancellation will also raise college tuition costs, which in recent years have been rising at four times the official inflation rate.

Former U.S. Treasury Secretary Larry Summers, who also once served as Harvard University's president, stated, “Student loan debt relief is spending that raises demand and increases inflation. It consumes resources that could be better used helping those who did not, for whatever reason, have the chance to attend college. It will also tend to be inflationary by raising tuitions.”

When college costs are artificially subsidized by government, they have less incentive to trim their sprawling administrative offices, identity group coddling, and ideological indoctrination programs.

Universities feel less pressure to prove to students that their pricey diplomas will pay off in the jobs market when Uncle Sam will bail out those who end up with worthless degrees.

Instead of the government-inflated bubble in college outlays bursting, it will continue to be artificially pumped up at the expense of everyone who chose not to incur education debt.

That includes people who worked multiple jobs to pay for college tuition as well as those who avoided college entirely and are now struggling to make ends meet amid persistently rising costs of living.

They should expect their money market accounts and bond holdings yielding less than the inflation rate to continue generating negative real returns. And they shouldn't necessarily expect to stay ahead of inflation via the stock market – especially if the economy continues on a downward trajectory.

Investors who had hoped inflation would be transitory must now face the reality that the political demand for more inflation is insatiable.

Politicians who seek to buy votes will never get behind any serious efforts to reduce inflation. That would mean reducing the supply of borrowed cash available for them to spend.

Most lawmakers give no thought to ever paying down the $31 trillion national debt. As interest rates rise, though, servicing costs alone could soon become fiscally unmanageable. Will the Treasury Department beg China and other governments that hold Treasuries in large quantities to grant debt forgiveness?

It likely won't come to that. Instead, the government can write off its own IOUs through the inflationary erosion of real interest and principal owed.

The largest holder of U.S. debt is, in effect, the government itself by way of the Federal Reserve. Conveniently, the Fed can create currency and buy government bonds in unlimited quantities to avert a formal default.

What the Fed cannot do is simultaneously monetize government debt by the trillions while also fulfilling its mandate to ensure price stability.

The risk is that the declining purchasing power of U.S. dollars morphs into a dollar crash. Given that “inflation reduction” as touted by politicians is a total sham, investors should at least be prepared for the possibility that inflation accelerates from here.

The ultimate alternative to rapidly falling fiat currency is incorruptible hard currency – represented for thousands of years by gold and silver.