Wyoming, Texas, and South Dakota are the three most pro-sound money states in America, according to the 2021 Sound Money Index. Meanwhile, Vermont is ranked absolutely last.

Released today for 2021, the Sound Money Index uses 12 criteria to determine which states maintain the most pro- and anti-sound money policies in the nation.

Alaska, New Hampshire, Utah, and Washington round out the fourth to seventh place range on the Sound Money Index.

During 2021, Arkansas and Ohio each ended their sales taxes on purchases of precious metals in their states, joining the 40 other states that have already ended this unfair practice. Arkansas and Ohio rose from 49th and 45th place to 33rd and 20th place, respectively.

The Buckeye State made a comeback in the past two years when Ohio pension trustees decided to allocate five percent of retirement funds to physical gold – and then the legislature reversed its prior decision to tax the sale of sound money. Ohio had fallen near the bottom of the Sound Money Index, but has now worked its way back into the top 20.

In fact, Ohio now stands as the only state in the U.S. currently known to allocate a percentage of state-held pension funds to physical gold. Pension trustees’ failure to own gold as financial insurance may violate their fiduciary duties as well as the “prudent man rule.” 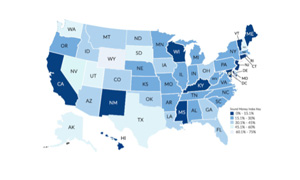 “However, many states are taking steps to protect their citizens from the damaging effects of America’s fiat money system,” Gleason noted.

About the Sound Money Defense League and Money Metals Exchange:

The Sound Money Defense League is a non-partisan national public policy group working on the state and federal level to bring back gold and silver as America’s constitutional money.