Foreign nations are demanding their gold
back from Janet Yellen’s Federal Reserve.

Since 2012, there’s been an unprecedented call from foreign nations to repatriate their gold from Federal Reserve vaults in the U.S. This is an incredible development given many countries’ 71-year reliance on the Fed as a custodian for their bullion.

Over the last few years, countries including, but not limited to, Germany, the Netherlands, France, Belgium, Austria, Poland, Ecuador, Finland, Switzerland, Venezuela, and Romania have either formally requested repatriation of their gold or are in discussions with the Fed about it.

Some of these nations, mind you, have held more than 50% of their entire reserves of bullion in the U.S. since 1944, when the U.S. dollar became the world’s reserve currency.

A major shift in thinking must have occurred in the last few years to prompt such action. A break in foreign gold holders’ trust in the Fed as a custodian of their precious metals.

There’s evidence that, in recent years, the Fed has been leveraging some of its foreign gold holdings to lower skyrocketing gold prices as part of its grand scheme to “engineer” an economic recovery from the 2008 Financial Crisis.

The Fed Has Acted Desperately in Recent Years

This is to be expected.

After all, the Fed has spent the past 7 years throwing everything but the kitchen sink at the chronically-ill American economy and its epidemic of long-term unemployment and underemployment.

The Fed has bailed out the Too Big to Fail banks to the tune of $14 trillion. It’s printed more than $4.2 trillion. It’s crushed down interest rates to zero and has kept them there.

It would not be surprising if the good people at the Eccles Building would include leveraging their foreign gold holdings in their campaign to prop up the economy. After all, high gold prices are a proxy for fears about the future of the economy, and prices reached generational highs in late summer 2011– 3.5 years into the Fed’s post-crisis “recovery.”

Interestingly, gold prices began their long journey downward from their summer 2011 peak just after the Economic Cycle Research Institute called a double dip recession and the Bureau of Economic Analysis. (If you believe government data – which reported that we narrowly missed a second recession due to GDP growth hovering just above zero.) Gold prices are supposed to rise when economic data are bad!

So, if the Fed has been leveraging its foreign gold holdings in order to lower the price of bullion, it’s quite possible that it simply doesn’t have in its possession all of the foreign gold it should. 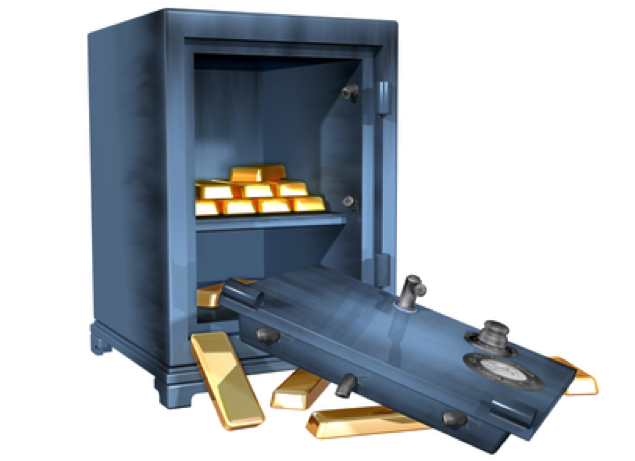 Again, this isn’t a stretch.

In fact, it’s Occam’s Razor: Hypothecation is a common practice in the precious metals world, and, recently, the Fed has been flat-out refusing foreign nations from auditing their gold and will only return large holdings on installment plans.

Pretty suspicious behavior, particularly given the long history of foreign nations continuing to store their gold in Fed vaults during times in which repatriation would have made more sense.

No Calls for Gold Repatriation during Prior Crises

The Fed became a popular custodian of foreign gold during World War II, when threats of appropriation of valuable assets by invading empires were an unfortunate reality in much of the Allied world.

In 1944, through the Bretton Woods Agreement, much of the globe came to the consensus that the U.S. dollar would become the world’s de facto reserve currency and that the dollar would be backed by foreign and domestic gold physically held by the Fed.

Then, in 1971, America repudiated its commitments under Bretton Woods, and Nixon untethered the dollar from gold. You might think that foreign nations holding gold at the Fed would have recalled much of their bullion at that time.

Not only was the gold not needed to back the world’s reserve currency any more, but the threat of appropriation by foreign empires had diminished significantly. Three decades had passed since WWII, the Khrushchev Era of the Cold War had ended years earlier, and the West had begun to develop diplomatic and trade relations with the Soviet Union and China.

But, despite these favorable conditions for repatriation, few nations called for it. It wasn’t worth the cost or effort: The price of gold at the time was at an inflation-adjusted 20th Century low of $210. (See the adjacent chart which shows historical gold prices in 2015 dollars, according to Bureau of Labor Statistics measures which have been modified over time to understate the true inflation rate.) 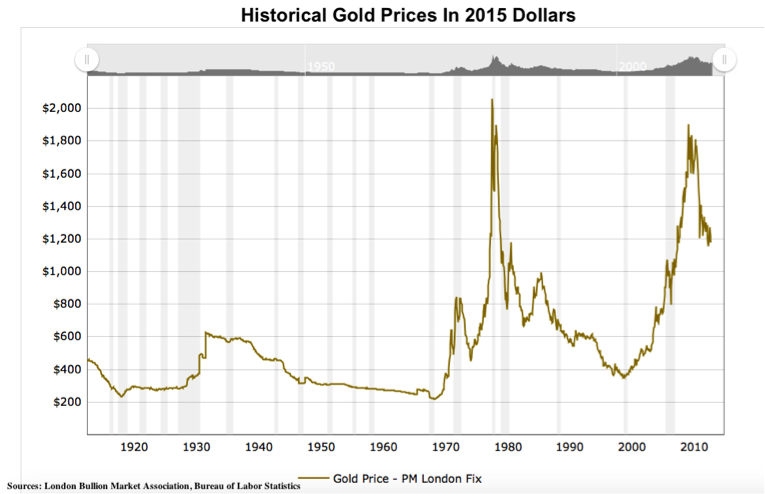 But the financial incentives for repatriation significantly improved by the end of the 1970s, to say the least.

By January 1980, with the Fed’s home country mired in stagflation and shocked by an oil crisis, the price of gold skyrocketed to an all-time record inflation-adjusted high of $2,100 (a high that stands today). Decades removed from the threats of appropriation during WWII and early Cold War-era empires, the late ’70s and early ’80s would have been a great time to repatriate bullion from the Fed. But there were few calls to do so.

More astonishingly, there were few calls for repatriation in the early 2000s, when Alan Greenspan’s post-tech bubble recession and Al-Qaeda’s devastating attacks on the world’s then-largest financial complex -- LOCATED JUST BLOCKS FROM WHERE THE FED WAS HOLDING THE GOLD – sent bullion prices skyrocketing. If there were an ideal time for mass calls of repatriation, it was then. But the calls just didn’t come.

Nor did they come during the 2008 Financial Crisis, an event which plunged the U.S. into its worst recession since the Great Depression and sent gold prices skyrocketing again…after a 7-year run-up since Greenspan’s tech bubble burst.

Given all of this history, the recent calls for gold repatriation suggest that foreign gold owners have lost faith in the Fed as a custodian of their precious metals. Should we be surprised?

Seth Mason is a free-market economics and political commentator for the Sound Money Defense League. His writings promote the ideals of economic strength and stability, sound money, equality of opportunity, and reduced government debt. Seth heads the Solidus.Center which works to expose the Federal Reserve, has a publishing background, and holds an MBA from the University of Georgia.