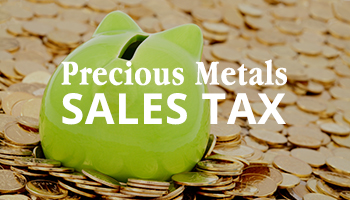 A strong showing in recent weeks from Virginia lawmakers to lower the tax bite on precious metals is good news for the sound money movement – and bullion buyers and sellers on all fronts.

Like almost half the states in the union, the Commonwealth of Virginia currently charges taxes on every gold, silver, and platinum coin, bar, and round sold inside the state. That’s right, many state governments demand payment of sales taxes when citizens simply exchange one form of currency for another!

But if Governor Terry McAuliffe signs new legislation headed for his desk, it would eliminate Virginia taxes on sales over $1,000 effective next July 1st. That's for every transaction, which could include a stack of small, individual coins and bars.

The Commonwealth might repeal taxes on rare coins as well as precious metal bullion, depending on last-minute changes. But that could take several more weeks to sort out before going to the governor's desk for signature.

Some States Are Reducing Sales Taxes on the Money Metals, Others Are Outright Repealing...

Other states have recently done away with sales taxes altogether on precious metals, or which have plainly recognized gold and silver as legal currency. But the good news remains that Virginia is the latest in a string of precious metals tax victories across the country.

Fortunately, there’s a growing appreciation at the state level for sound money, as concerns mount over deficits, inflation, and looming economic disaster thanks to unpayable trillions in federal and state debts and incoherent government financial policies.

Writing law is a cumbersome, stair-step process, as it should be. Virginia's law would remain in effect only until the end of 2018. Unless lawmakers later change that, Virginians will once again find themselves paying state taxes on all bullion purchases in just 3 ½ years.

But Virginia lawmakers left a clue as to how that may work out. The House vote was 98 in favor with only 2 opposed. The Senate vote was 37 to zip, with three not voting. The lawmakers seem to be saying "we know this is a good idea, but being politicians, we want to test the waters." We’ll see.

Virginia is the latest to affirm the national trend in sound money's favor. But the standard-bearer is Utah.

Utah Is the Model Legal Tender Law So Far...

Utah was far ahead of most other states through 2011, having no state sales taxes on precious metals. Utah raised the ante and plowed new ground in 2012 when it legalized the use of gold and silver as currency for any lawful buying and selling. The caveats in Utah's Legal Tender Act are (1) both the buyer and seller must agree to use gold or silver coins as legal tender and (2) only U.S. government minted gold and silver coins currently qualify.

To be clear, we at the Sound Money Defense League fully recognize that any political or legal language which elevates gold and silver up to the level of fiat paper Federal Reserve Notes is backwards. We are well aware gold and silver are Constitutional money. Nevertheless, Utah's and Virginia's changing laws toward precious metals are steps in the right direction.

Other states heard Utah's message and got busy on their own legal tender laws. Oklahoma overwhelmingly passed a measure similar to Utah's in 2014, recognizing gold and silver coins minted by the U.S. government as legal currency between agreeable buyers and sellers.

Arizona's legislature passed its own Constitutional Tender Act in 2013, after hearing testimony that the dollar system is “a recipe for worldwide bankruptcy.”

But Arizona's measure did not get Governor Jan Brewer's signature. While saying she understands fears of economic chaos, she wanted to keep the state's taxing power. But angry, vocal Arizona lawmakers brought it up again in 2014… and again this year. 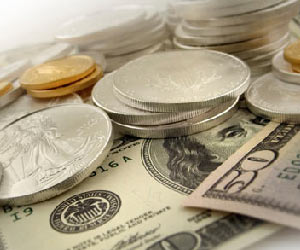 Wording in the Arizona measure tells the whole story: “The exchange of one form of legal tender for another does not give rise to liability for any type of tax.” In other words, just as you would not expect to be taxed when changing a $20 dollar bill for smaller notes at your bank, lawmakers say no taxable event occurs when exchanging gold and silver for dollar bills.

Other states are discussing gold and silver as legal tender, but in all cases, these measures take more than a few years to wind their way into actual law. (The imperative of accelerating this process through grassroots mobilization is a key reason why we launched the Sound Money Defense League.)

State lawmakers addressing precious metals at any level speak directly to Americans who are correctly concerned about the $18 trillion national debt, which can never be repaid, and who are terrified of inflationary pressures and a looming economic collapse.

As more and more personal freedoms are lost in Washington, more taxpayers are looking to state and local governments for relief from higher taxes and oppressive regulations. Utah's Legal Tender Act screamed “no confidence” in U.S. Federal Reserve policies and the U.S. government's ability to contain an economic meltdown. Lawmakers said as much. The Oklahoma and Arizona initiatives carried that same message of no confidence in Washington.

The other 28 have a menagerie of laws and restrictions on bullion purchases, either taxing it all, or taxing below a certain dollar sales price, or taxing according to a wide variety of criteria, including country of origin. (If you live in one of these states and buy from an out-of-state precious metals dealer, however, sales taxes will generally not be collected by the dealer.)

We want to caution here that any sale of your privately held precious metals producing a profit in paper dollar terms still triggers state and federal income tax obligations. That hasn't changed. You should always be aware and informed of your own individual tax situation.

Note: If you live in Virginia, please call the Governor Terry McAuliffe’s office at 804-786-2211 and urge him to sign SB 1336 and roll back unfair sales taxes on precious metals.