Why Use Gold as Money?

History shows us that when countries use a valuable commodity for money, they have zero or low inflation; less volatile economic cycles; and more peace, liberty, and prosperity (smaller governments). Gold will be the commodity analyzed in this article.

A key benefit of using gold as money is its value stability. For example, the number of grams of gold needed to buy a barrel of oil has been relatively steady over the years. 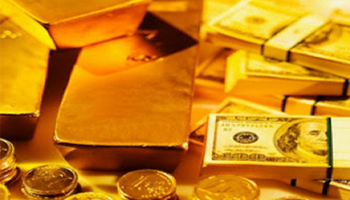 Econ 101 tells us that a commodity such as gold in limited supply, and with increasing demand for it (growth of the economy), should retain or even appreciate in value (purchasing power). This has huge importance because it kills the "there is not enough gold" argument. The use of gold as money gives a positive incentive to save and avoid debt.

Politicians don't like gold to be used as the currency, because they want access to more money than they get by merely taxing. The spending demands for welfare, warfare, and other government programs is so great, the politicians want the ability to create money "out of thin air." Fiat money with "face value" decreed by the government (called Federal Reserve Notes in the U.S. and which are not redeemable for gold) serves this purpose.

Even when some level of redeemability (exchange for precious metal) exists, governments often suspend it before, during, and after wars. The U.S. did so for the Revolutionary, 1812, and Civil Wars. Once gold redeemability is lost, the government must be pressured to restore it -- often with a less valuable currency.

The two key reasons for using a commodity as money are to:

A. Limit excess expansion of the money supply (inflation; loss of value) by the government for self-serving purposes.

B. Provide a market-based store of value. The commodity could be wheat, iron, diamonds, or pearls, but the market (users of money) usually chooses gold because it works best.

To achieve broad use, commodity money must be made of, or contain, a material that is:

1) Rare, with a low amount in existence now and limited new supply.

2) Malleable, so it can be made into coins.

3) Stable physically and chemically; it must not break, rust, or rot (can be stored and endures through much handling).

4) Easy to identify (recognize) and determine purity and amount.

5) Difficult or impossible to counterfeit.

6) Homogeneous in content (a melted chunk is the same throughout).

7) Divisible into pieces without changing their incremental value (diamonds and pearls aren't).

8) High value per ounce (not bulky to handle or store).

9) Acceptable to most sellers (familiar and recognizable).

10) Has market value when not used as money. This value equals the amount of the transaction (not just a symbol). Thus it is a "store of value" when saved by the owner.

This approach allows the use of representative paper notes ("claim checks" for gold), or base-metal tokens, so long as they are marked to show the amount of gold they represent, and can be redeemed for gold by any bearer, on demand.

For thousands of years, the market of money users has decided that gold fits the above requirements best. But silver and copper can have a role in parallel, with no fixed ratios set between them as to value per gram (i.e., no bi-metallic standard).

It is interesting to note that gold is not "consumed" as are other commodities, including silver and copper. Thus, except for wear, and loss, over 90% of all gold mined in history still exists in recoverable form (even if buried in a tomb). Silver and copper supplies and costs are more volatile than gold (more new production, consumed for industrial use, etc.), so are less attractive, but usable.

When gold is used as money, it has no "price" anymore. Just an exchange rate with other money. For example: What is the price of a dollar? The gold weight is the unit of account for pricing (grams, etc.). This will take some getting used to as we evolve to pricing in weight of gold. 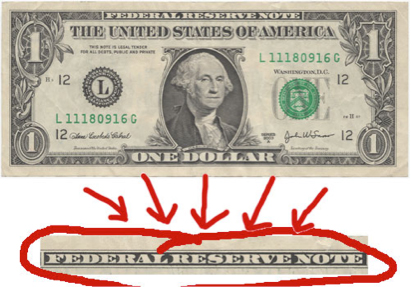 The Fed is actually a private cartel of banks

From its origin until 1913, the U.S. used a combination of foreign and domestic coins and local "bills of credit," had two failed central banks, Continental and Greenback paper dollars (both became worthless), and various runs and panics in a turbulent banking system. The shadowy, extra-constitutional Federal Reserve System was created in 1913 and has a monopoly on creation of "legal tender" money. It was secretly planned by and for bankers and politicians so they would never run out of money!

At first, anyone had the right to trade-in their Silver Certificate paper dollars for a silver dollar (this ended in 1968), and deal in gold for transactions. Franklin D. Roosevelt took those rights from mere people as one of his first acts as president in 1933, and only nations could redeem paper for gold. In 1971, Nixon ended this right for nations when he abrogated the 1944 Bretton Woods Agreement to end a global run on America's gold reserves.

France, England, and others were redeeming the U.S. dollars (USD) accumulated in Europe due to our postwar spending and inflation. The U.S. was poor after spending on Vietnam and LBJ's "Great Society." With no link to gold, the U.S. could make dollars out of thin air as needed – and did we ever! Prices started their "hockey stick" shaped rise a few years later, as the effect of excess money creation and spending trickled to the world economy.

Within in a few years, all nations worldwide ceased redeemability of their currencies. Even the prudent Swiss floated the Swiss franc, but have been less abusive than others; hence while one U.S. dollar equaled about 4 Swiss francs in 1961, it is now about a one to one ratio. By 2008, the Swiss had "only" inflated 2.5 times while the U.S. inflated by 10.

Today Is a Worsening Situation

The U.S. has been the worst abuser among developed nations (older countries remembered their lessons from past monetary failures). The U.S. has created so much new free, fake money since 1971 that the U.S. dollar has lost about 80% of its purchasing power since then. This excess expansion of the money supply is called "monetary inflation" (like a balloon) with its consequent price increases.

Compare prices of common commodity items, such as a pizza, a restaurant meal, or even a car:

In fact, the dollar has lost over 97% loss of its purchasing power since the Fed started in 1913! The only reason we can get away with our worldwide spending and borrowing is because the U.S. dollar is the world's primary reserve currency.

The dollar is viewed as a share in USA, Inc. and we continue the long abuse of our economy by; 1) spending, taxing, and harmful intervention by the Fed and government, and 2) excessive expansion of the money supply (thus each dollar is 'worth less'). The era of U.S. world dominance is ending, as it does with all empires. When (not if) the dollar loses its reserve currency status, there could be a 50% or more loss in value in a few days, and prices at Wal-Mart (most items are imported) would double or more! 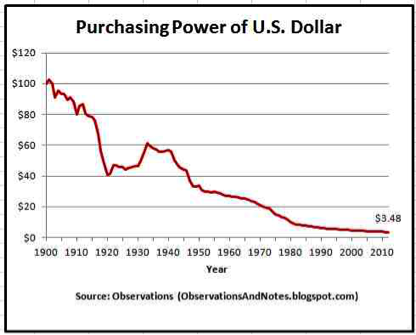 Politicians and bankers love an unending supply of cheap money, but such fiat systems always fail. It is part of the pattern for all failed empires in history, and the Empire-USA is now entering the failure phase.

To avoid a chaotic crash, we must reduce spending (including our role as the world's policemen), and convert to a gold-money system. The gold the U.S. government owns could be used to back all existing U.S. dollars and allow redemption of paper for gold once again. But this would amount to about 2/10,000 troy ounce per dollar (or less if the government is lying about having 8,134 tonnes) and would imply a price of as much as $50,000 per ounce.

Thereafter, prices would be in weight of gold (grams, milligrams). All nations would soon convert to gold money, or sellers would not accept their trash paper. Variable foreign exchange valuations would end between countries using gold. The IMF, World Bank, BIS, G-20, and all other meddling government groups would fade and die.

Write, call, and visit your Senate and Congress persons to urge support of sound money policies. Most now prefer unlimited inflation (print money to pay bills), or default-repudiate (ignore debts), but that causes more damage and has no future benefit.

Despite the pain to some the conversion to gold may cause, the damage is far less than an uncontrolled crash, and there is a bright future afterward. Let's get started.

Editor's Note: This article is updated and revised from an earlier version posted at ActivistPost.com.

Dave writes to promote better government (more liberty, peace, prosperity, liberty, morality, and justice), using ideas based on his education in economics and experience as a successful entrepreneur and CEO.